People have been asking - when is the next workday?!?!? We're humbled and thrilled about the outpouring of support!! THANK YOU!!!

Missed out on the first "Heavy Lifting, Gardening & Gin and Tonics" Workday?
Helped out at the June workday, and just couldn't get enough?!?!?

We'll get started at 1:30 pm, and start wrapping up for food and drink around 5pm. If you can RSVP and let us know if and when you're coming, that would be amazing!!
email us at dirtpalacepublicprojects@gmail.com

If you have work gloves, wear em! We'll have dust masks, hand wipes, and tools on hand. Interested in learning more about the Wedding Cake House project? You can find that info HERE

i.e. the sewer system
One thing about this process is that there is a form for everything and you discover that various municipal agencies don't talk to each other as much as one might think.  We have to get a permit from the Narragansett Bay Commission in order to get our full permit from the city of Providence, and in order to get our sewer permit we have to have a map of how our property attaches to the main system. These maps and archives exist in a number of different places. First I went to the city archives on the 5th floor of city hall, but they only have drawings that are like pre-1890...and even though the house was built in 1867, it looks as though it was not connected to the municipal sewer system until 1900. So my next stop was the Department of Public works, where not only did I get what I needed, but also met a really cool employee who seemed genuinely excited to help me find the documents that I was looking for.  He was familiar with the house and area because as part of his job in snowstorms he tracks plowing in that part of the city and showed me amazing middle of the night bright full moon photos of Broadway in the snow.  Then we talked about the Beatles and animator Ron Campbell. I know that I probably don't have to mention it to any reader of this blog, but art and music enthusiasts are the best, and part of the magic of Rhode Island is that people excited about these things turn up everywhere! Anyway aren't these 100+ year old drawings of the sewers awesome!!!!! 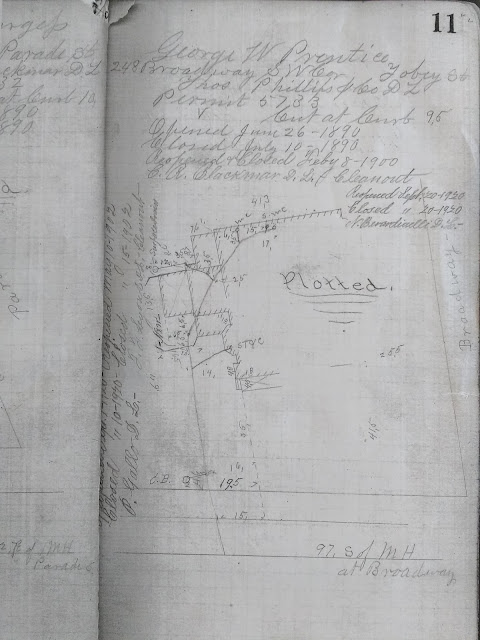 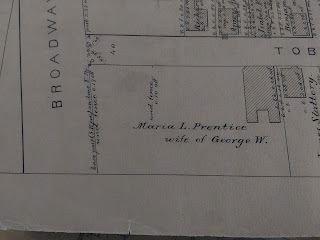 Of Walls and Wallpaper

While we're not changing much of the interior layout of the Wedding Cake House, there were a few minor areas that had to be framed out to enclose egresses or make accessible bathrooms. Here are some pictures of these walls in their raw state! Also we've been documenting wall papers as they are uncovered on the walls. The first room to have wiring run through it (and correspondingly some holes poked in the walls) revealed FIVE layers of various kinds of wall paper! 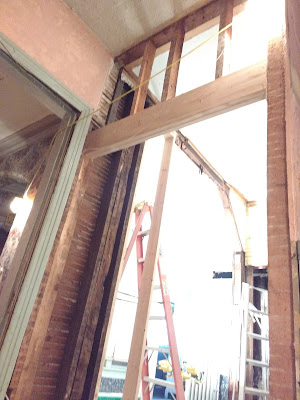 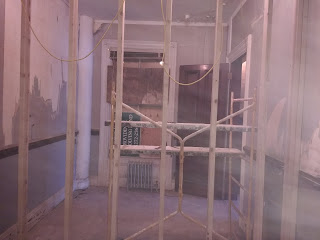 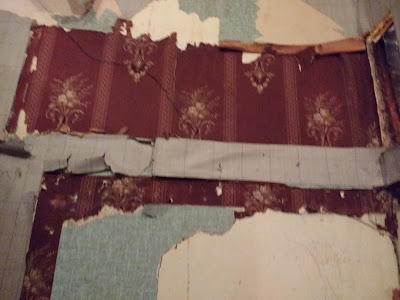 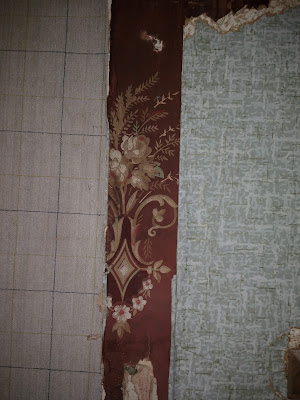 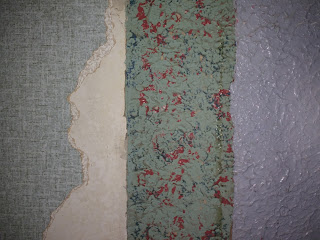 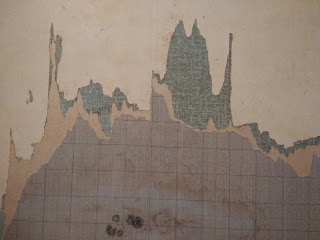 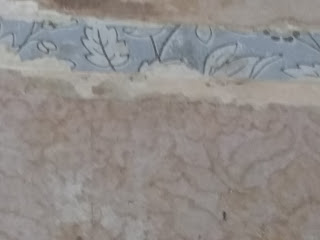 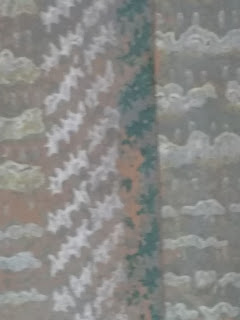 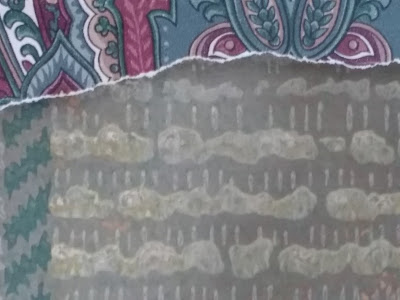 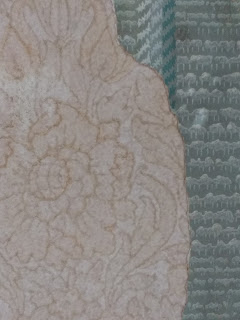 hero of the Lowes Parking Lot

Sometimes when it's hot and you have to load 2 million 2x4 into your Subaru, a well decorated cargo van can really make your day. 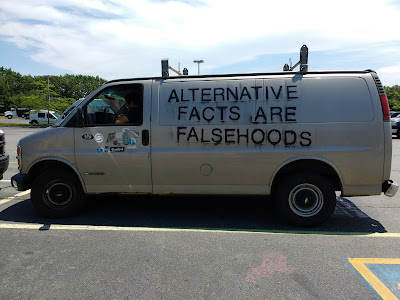 Some people might call it "ceiling demo" or focus on the part where the slime scenes from "You can't do that on Television" are reenacted with a type of ancient insulation that bears a striking resemblance to kitty litter falls on your head while you grin and bear it... But nahhh...what's going on here is the discovery of amazing installation art made by time traveling visionaries of a hundred years ago, strategically shoving old pillows and panty hose in between attic rafters in such a way that when our crowbars pull down the plaster and lath there is a veritable hanging garden of used ladies leggings dangling with the dust-mite fauna of disintegrated feathers and woolen scraps. This pop-up installation was for a limited time only as it's kinda creepy and our electrician already thinks we're a little nuts. But please do not hesitate to be in touch if you would like to view further photographic documentation of this important art installation. (we totally took a lot of pictures) 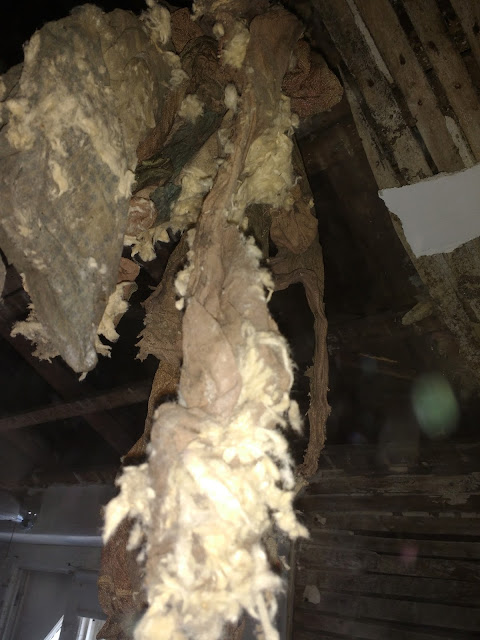 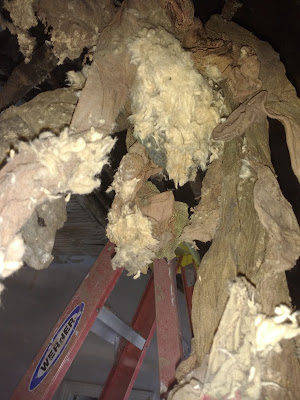 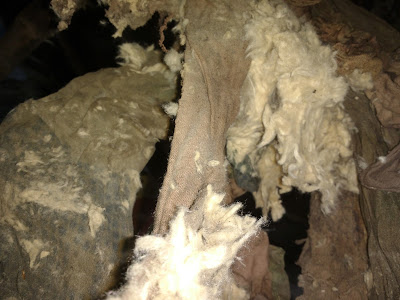 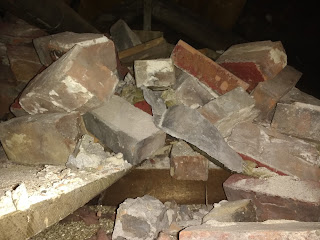 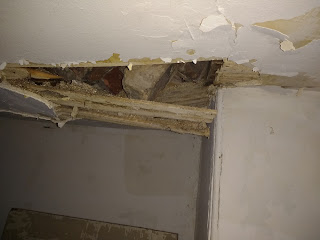 So it's been a while since our last post & mostly that's because we've been up to our eyeballs getting things in order to get contractors going...Last week we were literally up to our eyeballs with bricks. Check this out... Once upon a time the house had 3 chimneys running up through the building. A quick glance from the outside and it's clear that only one remains. What happened to the others? Well that was a mystery that we solved when cleaning out the attic...I was just innocently crawling around with my head lamp on sweeping up petrified squirrel droppings and assorted scraps of rubble and I look over into a corner and do a double take...is that a giant pile of bricks? I crawl over to investigate...who decided that putting a brick pile in the attic was a good idea I wonder? And has it had an effect on structural things? I figure out where on the third floor the bricks are and low and behold that part of the ceiling has totally been sagging... Now in all fairness...most of the 3rd floor ceiling was sagging and falling apart, but generally this was happening from water damage. In Room #7, where the brick pile was stacked above, the was actually no water damage...all of the warpy weird ceiling was caused by, you know, stacking a ton of bricks onto plaster and lathe. The long and short of it is, that it's kind of a miracle that no one got knocked out by a rain of bricks, and it was a good lesson that not all contractors do things the "right" way...by right I mean, not creating the potential for skull crushing type hazardous situation. We took the bricks out one by one and are currently moving them downstairs.  Bricks have varied greatly over the years in terms of how much they each weigh, so we're not certain if our approximately 400 attic bricks add up to quite a literal ton...but we think it's close. Also for the record, we did totally nerd out and research the history of 19th century brick production in RI, and the report is that most RI bricks were made in Barrington...
at July 19, 2017 No comments: